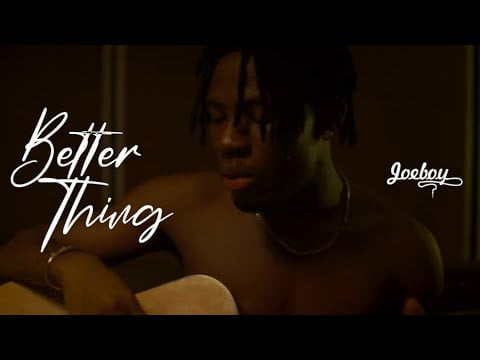 emPawa presents Better Thing official video, performed by Joeboy.
Off his Somewhere Between Beauty & Magic project, Young Legend – Joeboy drops a new music video for the track “Better Thing“. This visual is a follow up to ‘Show Me video’, which has over 3 Million views on Youtube.

Joeboy continues his ascent with his debut album, “Somewhere Between Beauty & Magic”, a celebration of love in its myriad forms. “Working on this project was life changing — I met a version of myself I never knew before,” JOEBOY says of the project, recorded over the last year with a team of producers including such notables as Dëra, BeatsbyKO, Killertunes and E Kelly. “The plan was to come up with a title that best describes love, without actually using the word love, hence Somewhere Between Beauty & Magic. Because love is a perfect blend of beauty and magic.”

“Better Things” is filled with gems, rhythm, and mellow vibes. It’s an R&B/Afro-Pop record with a mid-tempo ride that cuts through vocals, guitars, and percussions. Produced By DERA.

Video Directed by KingTula Films, Watch and Enjoy below